Republicans have managed to create and maintain the myth that their party is best for the American economy. The facts say something different.

Voters continue to trust Trump on the economy, even though the strong performance was inherited from a Democratic administration. And even after he ran the economy into the ground with his mishandling of COVID-19.

But the facts are not on the Republicans’ side. Historically, the American economy has performed measurably better when Democrats are in charge.

Here are some quick stats you can use when arguing with your own crazy uncle:

1) Since 1947, when official GDP calculations were introduced, GDP growth under Democratic administrations has consistently outpaced that of Republican administrations. This is true even when major crises like the Great Recession and the COVID-19 pandemic are factored out. 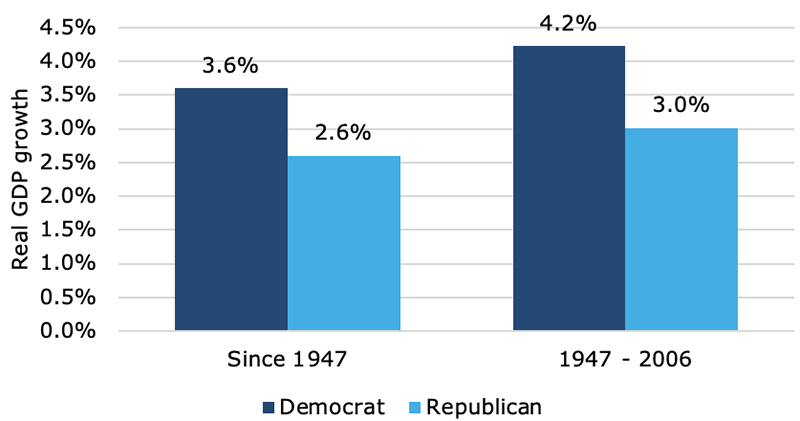 A similar study by Princeton economists found that from Truman to Obama, growth was 1.8 percent higher under Democratic administrations than their Republican counterparts.

2) On average, stock market growth is stronger under Democrats. Again comparing the period since 1947, data shows that markets grew an average of 10.8 percent under Democratic presidents, compared to 5.6 percent for under Republican presidents. 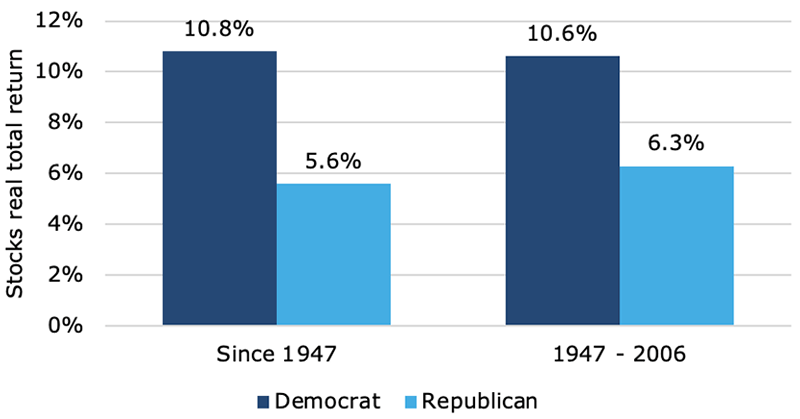 Since the 1960s, when the party holding the presidency began to fluctuate regularly, Democrats have, on average, outperformed Republicans in terms of job growth. Republican President Regan is an outlier, as he did post impressive job numbers. Here is a comparison:

4) Democratic policies tend to put money in the hands of a more diverse set of individuals.

According to investment bank Liberum, one reason the American economy thrives under Democrats is because of the economic multipliers that correspond with each party’s approach to stimulus.

Republicans tend to cut taxes while Democrats tend to expand social safety nets and invest directly in the economy.

According to Liberum, a tax cut that reduces government revenues by one percent grows the economy by an average of 0.3 to 0.4 percent.

On the other hand, expanding benefits, like unemployment, at a level with the same relative cost to the government grows the economy by 1.2 to 1.7 percent.

The multiplier, therefore for a typical Republican stimulus is .03 to .04, and for a typical Democratic stimulus, it is 1.2 to 1.7. This means for the same cost, a demand-side, benefits based stimulus creates 4 times the economic growth than does a supply-side, tax cut based stimulus.

Republicans simply have to run higher deficits to achieve the same results, a position that should be difficult given their supposed disdain for debt.

Democrats tend to use the government to invest directly in programs that cannot be supported solely by the free market, like education, infrastructure and research. Although these types of investments do not produce immediate profits for the government, they have been demonstrated to produce payouts into the future in terms of more widespread economic well-being. And that is good for all Americans.

The difference is big. At those rates, over thirty years your $50,000 income compounds up to $105,000 under Republicans, $182,000 under Democrats — 73% higher. (And this is all before considering distribution — whether the growing prosperity is widely enjoyed, or narrowly concentrated.)

Hundreds of similar pictures are easily assembled — different time periods, different measures, aggregate and per-capita, inflation-adjusted or not — all telling the same general story. No amount of hand-waving, smoke-blowing, and definition-quibbling will alter that reality.

In other words, tax cuts would have to be 5x larger than increases in spending to have a similar economic impact.

“Readers should note that the above is not a political or ideological statement. It is an empirical observation and it holds predominantly in the United States,” Liberum concluded.