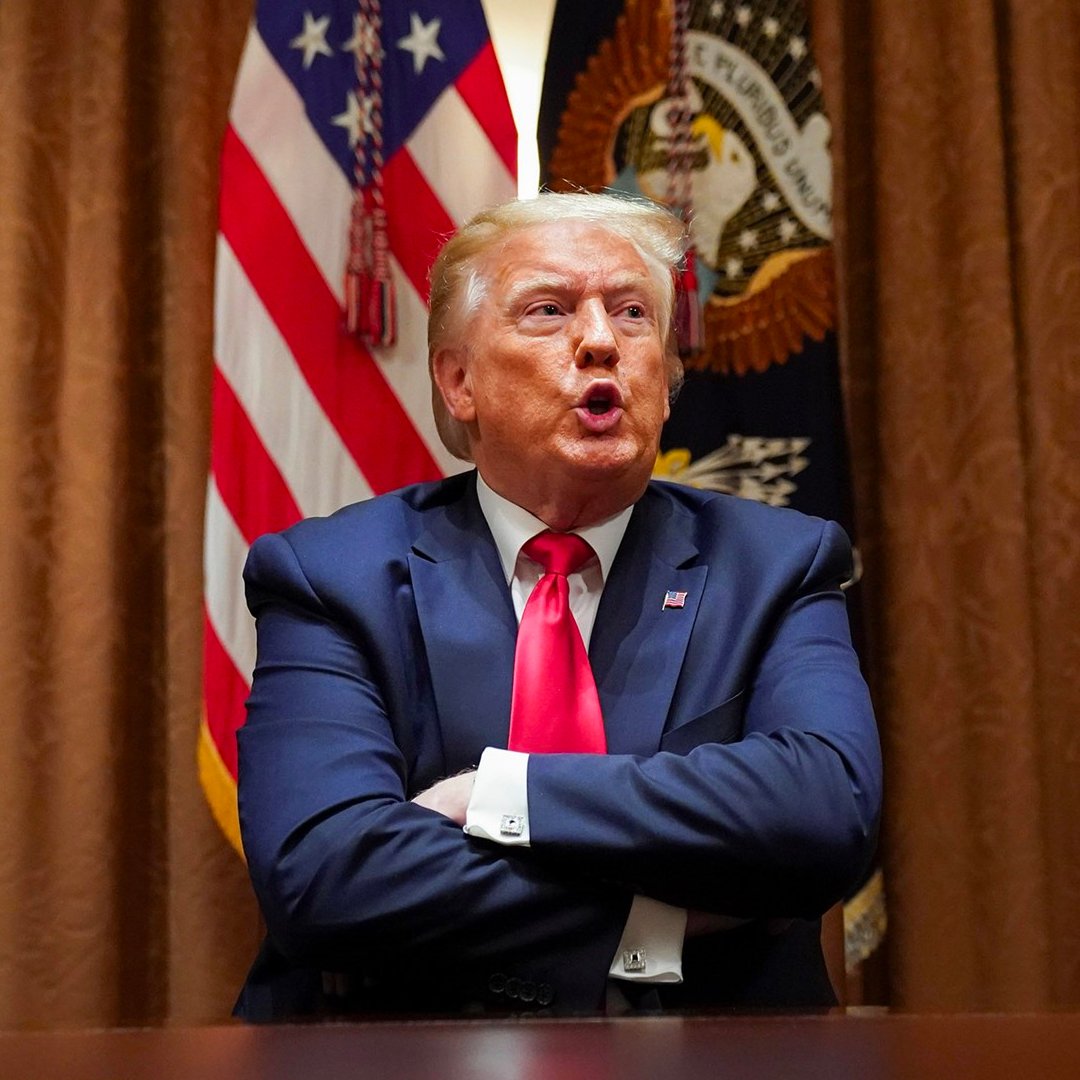 The idea that Donald Trump has done more for African Americans than any president since Lincoln is absurd on its face. Lyndon B. Johnson, of course, signed the Civil Rights Act of 1964 and the Voting Rights Act of 1965 into law. Any argument ends there.

However, Donald Trump likes to brag about all the things he has accomplished for the black community, while simultaneously equivocating on the condemnation of white supremacy and calling Black Lives Matter “an extreme socialist” movement that wants to “achieve destruction of the nuclear family.” (Trump also called the painting of Black Lives Matter on Fifth Avenue a “symbol of hate.”)

Much of Trump’s boasting is, as is common, an effort to take credit for policies that were set in action by his predecessors. When Donald Trump had a chance to craft a real racial justice policy in response to world-wide protests sparked by the murder of George Floyd, he chose instead to divide the nation by calling Democratic areas “anarchist jurisdictions” and sending agents into cities in unmarked vehicles to abduct citizens from their own streets.

Here is a brief history of the reality behind Donald Trump’s accomplishments.

Donald Trump points to his funding of Historically Black Colleges and Universities as one of his wins for black Americans. And he did sign funding into law. However, it was part of a budget presented to him by Congress — as a matter of continuing levels of funding already in place — not something for which Trump specifically advocated.

According to Rutgers professor Marybeth Gasman, “Congress does all this work and presents it to him in the budget, and he can choose to sign it. This year, he held off on signing some significant STEM funding, making HBCUs beg for it. Trump has promised all kinds of things to HBCUs and has followed through on little.”

In contrast, a Biden administration would invest over $70 billion in the Historically Black Colleges and Universities and Minority-Serving Institutions. As a part of this investment, Biden hopes to designate $10 billion in the creation of at least 200 “centers of excellence” that connect students to jobs in fields where minorities are underrepresented.

He would also offer free tuition to students attending HBCUs whose families earn less than $125,000 per year.

Joe Biden has a plan to dedicate relief funds to minority-owned businesses and establish a support network that provides legal and accounting services to such businesses so they can compete fairly for government programs and grants.

Trump’s Opportunity Zones program was established as part of his widely unpopular 2017 tax cuts. According to Trump, the opportunity zones would provide “billions of dollars” for “low-income communities.” However, since 2017, results show the zones primarily gentrify neighborhoods, pushing minority community members out.

This is because there were no requirements placed on who received the money or how it was spent. The beneficiaries of Opportunity Zone funds are primarily wealthy white investors with no connection to the communities in which they are developing properties. In fact, according to MarketWatch:

“In Houston, Texas — where more than one in five people live in poverty — this program has given rise to the construction of a 46-story, glass-wrapped apartment tower, where amenities will include a yoga lawn and a pool surrounded by cabanas and daybeds. This is the very city where two-thirds of the neighborhoods vulnerable to gentrification are located within opportunity zones.”

Joe Biden has a plan to double funding for the State Small Business Credit Initiative and Expand the New Markets Tax Credit, which gives credits to those who invest in community development organizations, and to double Community Development Financial Institutions funding, which supports the creation of local, mission-driven financial institutions in low-income areas.

He also wants to create a Public Credit Reporting Agency to serve as an alternative rating agency with the goal of eliminating racial disparities in credit scoring.

According to Washington Post fact-checkers, “Passage of the First Step Act, which overhauled federal sentencing laws, was a scaled-down version of an effort that began in 2015 and built on a law passed by Obama.” In fact, federal efforts to reform prisons have been underway for over a decade.

The First Step Act of 2018 was the result of years of negotiations and incremental steps, beginning in 2004 under President George W. Bush with the introduction of his Prisoner Re-Entry Initiative (PRI), which was designed to help formerly incarcerated individuals successfully re-enter their communities. The PRI led ultimately to the passage of the 2008 Second Chance Act, which provided federal funding to community organizations working with formerly incarcerated individuals.

In 2010, the Obama administration signed the Fair Sentencing Act, which reduced the disparity in sentencing between crack and powder cocaine and updated some mandatory sentencing rules.

In 2013, the administration introduced the Smart on Crime Initiative which advised U.S Attorneys to stop automatically bringing charges that imposed mandatory minimum sentences, except in very egregious cases.

In 2015, after the failure of the Smarter Sentencing Act (SSA) of 2014, Senators Charles Grassley and Dick Durbin introduced the Sentencing Reform and Corrections Act of 2015, which aimed to reform federal mandatory minimum sentencing. President Trump won the 2016 election before the bill became law, and most advocates assumed it was dead.

Jared Kushner, however, revived hope for the bill. His father has spent time in federal prison (on charges of illegal campaign contributions, tax evasion, and witness tampering), and as a result, Kushner developed an interest in criminal justice issues.

Kushner pushed for negotiations to continue on the Sentencing Reform and Corrections Act and his efforts resulted in the First Step Act, which has allowed thousands of people to achieve early release or reduced sentences. Donald Trump does deserve credit for signing the Act into law.

However, since the First Step Act became law, the Justice Department has, according to Vox, worked to “block hundreds of eligible beneficiaries” from being released and tried to return some who have been released to prison.

As a whole, the implementation of the law has been spotty, and Donald Trump himself can certainly not fully take credit for its passage. Many people, under three administrations, worked toward passing legislation on prison and sentencing reform — efforts the president refuses to acknowledge.

Biden has a plan for lifting all Americans that includes criminal justice and sentencing reform. While many progressives believe the plan does not go far enough toward address policing reform, it does begin with the recognition that systemic racism exists and needs to be addressed.

Biden has proven he is willing to listen to people with views that do not match his own and craft policy that works toward measurable outcomes, not photo-ops.

After many months of negotiations between a Republican-controlled U.S. Congress and the Trump Administration, on December 21, 2018, the First Step Act of 2018 (FSA) was signed into law by President Trump. While this legislation was named the “First Step Act” to signal that it was the first attempt at incremental change to the federal criminal justice system, that name is actually a misnomer and ignores several successful reforms that preceded the legislation’s passage. The FSA was actually the next step of many previous steps that have resulted in reforms far more significant to the federal criminal justice system.

As Catherine Kim reported for Vox, Trump’s Justice Department, under Attorney General Bill Barr’s direction, has “attempted to block hundreds of eligible beneficiaries” from being released and has tried to send those who have been released back behind bars, according to the Sentencing Project. “The department has tried to freeze applications or re-incarcerate former inmates by setting higher standards for their release,” Kim wrote.

Moreover, Trump has failed to mention how the bill was the “culmination of several years of congressional debate” over how to reduce the size of the federal prison population and maintain public safety, according to the Congressional Research Service. The law is basically a scaled-down iteration of the Sentencing and Reform Corrections Act that was introduced in Congress in 2015.

But there are no requirements on what these investments look like, and no requirements on who these developers invest in. The people who benefit from the preferential tax treatment don’t need to live, work, or have a business in the opportunity zone. They can come in, build new housing developments or businesses that local residents can’t afford, get their tax break, and leave.

These tax breaks overwhelmingly benefit wealthy people or corporations — those who have the money to invest, to begin with.