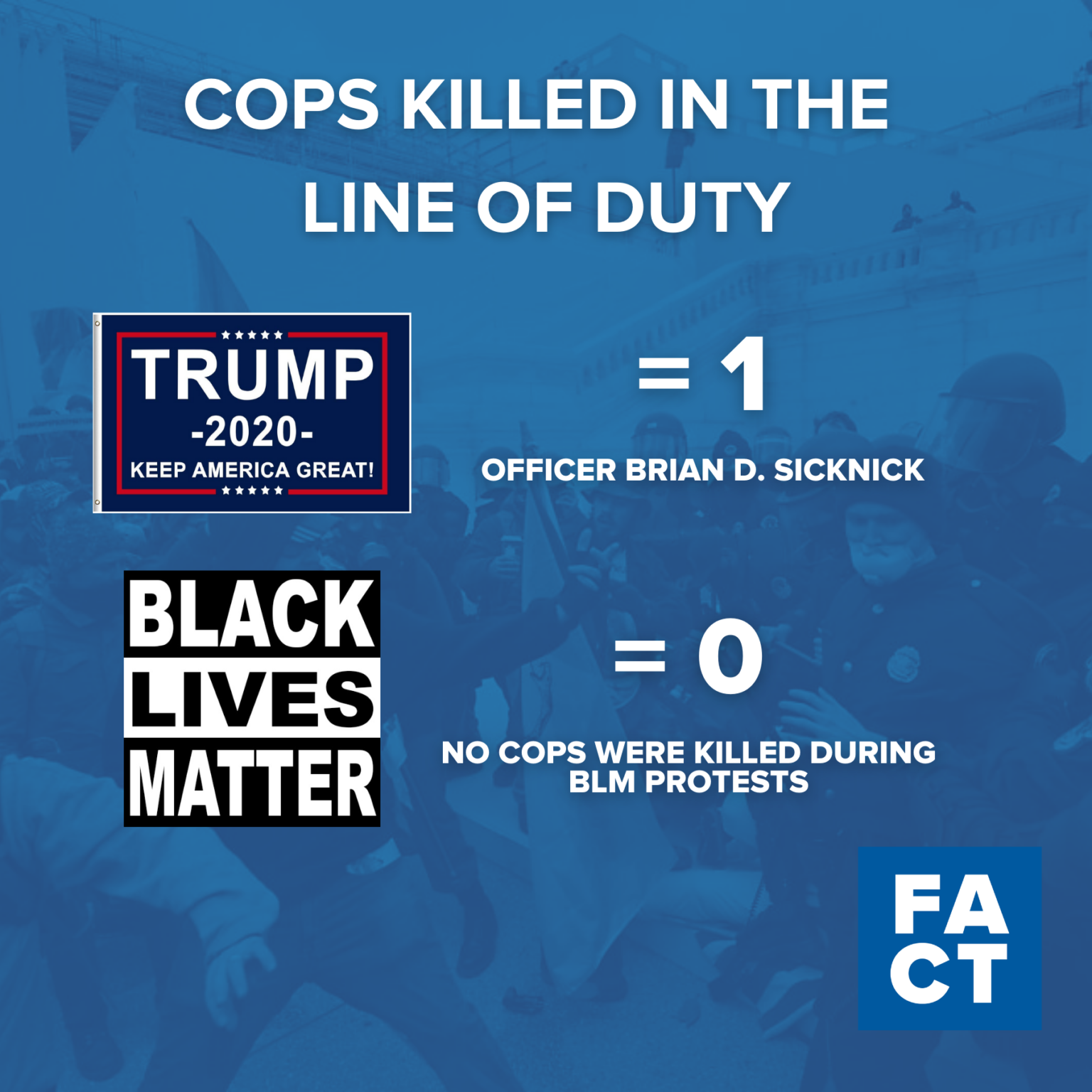 As Capital Police Officers testify before congress about the January 6th insurrection, disinformation on social media is in full swing as many try to paint a false equivalency between the Black Lives Matter protests of 2020 and the January 6th riot that resulted in one police officer being killed in the line of duty and 5 other deaths.

Following the January 6th riot, two Capital Police Officers committed suicide but their cause of death has not yet been reclassified as “in the line of duty.”

Capital Police Officer,  Jeffrey Smith was struck in the head by a metal pole during the riot. On January 14th, he took his life.

The families of Smith and Liebengood are wanting the deaths to be classified as “killed in the line of duty.”

Former President Donald Trump took no action as the capital was under attack. 65 D.C. police officers were injured in hours of hand-to-hand combat. More than 70 Capitol Police officers were hurt during the attack. The National Guard was not called in until that afternoon when ordered by former Vice President, Mike Pence.

FACT UPDATE
This fact has lead to some heated debates on Facebook. One commenter brought up a story on Yahoo! News which claimed that BLM protests had killed “a number of police officers.” You can read it here. When doing research for our fact, we also came across the article. However, after researching the accuracy of the statement “A number of these police officers have been killed in the line of duty” we determined it was not actually correct. Here is why:

Sicknick was assaulted by Julian Elie Khater, 32, of Pennsylvania, and George Pierre Tanios, 39. Both men were active participants in the riot.
Yes, there were injuries throughout the protests of 2020 – nobody is denying that – and The Guardian did some outstanding reporting on that topic. But this fact was to dispel the myth that more cops were killed in the line of duty from BLM protests than the January 6th riot… that is simply false.

The Officer Down Memorial Page

At least 11 Americans have been killed while participating in political demonstrations this year and another 14 have died in other incidents linked to political unrest, according to new data from a non-profit monitoring political unrest in the United States.

Nine of the people killed during protests were demonstrators taking part in Black Lives Matter protests. Two were conservatives killed after pro-Trump “patriot rallies”. All but one were killed by fellow citizens.

Around 5:35 p.m., Smith was still fighting to defend the building when a metal pole thrown by rioters struck his helmet and face shield. After working into the night, he visited the police medical clinic, was put on sick leave and, according to his wife, was sent home with pain medication.

In the days that followed, Erin said, her husband seemed in constant pain, unable to turn his head. He did not leave the house, even to walk their dog. He refused to talk to other people or watch television. She sometimes woke during the night to find him sitting up in bed or pacing.

“He wasn’t the same Jeff that left on the 6th. . . . I just tried to comfort him and let him know that I loved him,” she said. “I told him I’d be there if he needed anything, that no matter what, we’ll get through it. I tried to do the best I could.”