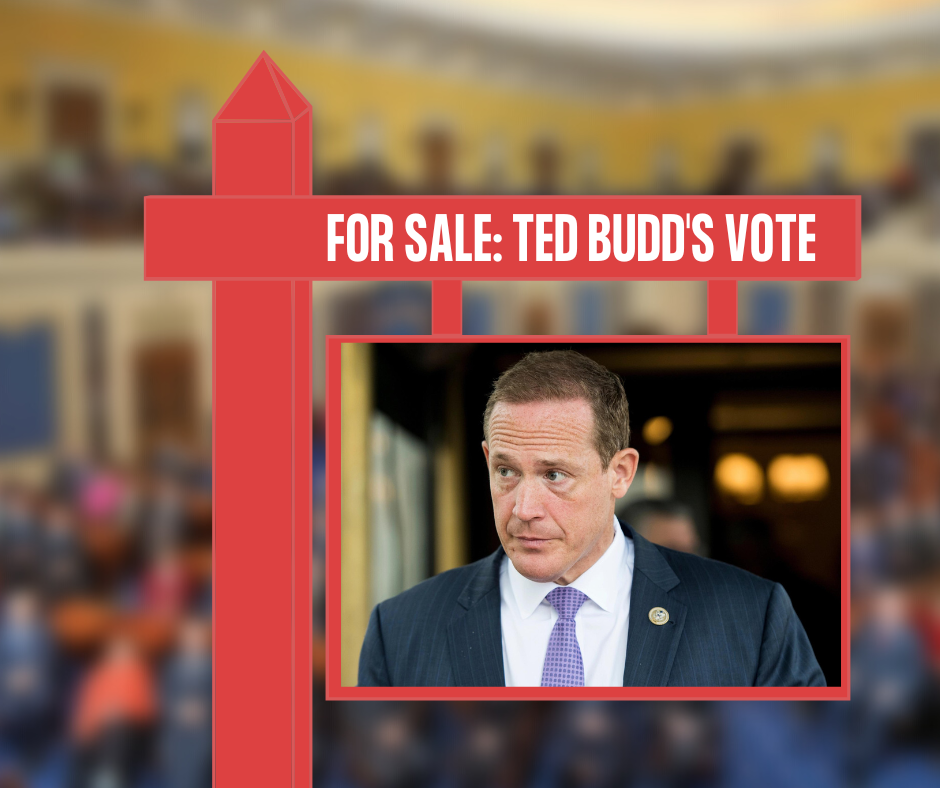 The cost of prescription drugs is a flashpoint for Americans needing medications but cannot afford them due to the ever-increasing prices. Congressman Ted Budd voted against H.R. 3, the Elijah E. Cummings Lower Drug Costs Now Act of 2019, which would lower the cost of prescription drugs and insulin. Days later he received a significant influx of cash from pharmaceutical political action committees.

On December 12, 2019, H.R. 3 passed, by a vote of 230-192. The 192 voting in opposition included Ted Budd. On December 12, 2019, Budd received a $2,500 contribution from GlaxoSmithKline’s political action committee. Several days later, drug giant Pfizer sent him a check for $1,000. Budd voted against the best interests of his constituents, allowing Big Pharma to continue to charge high prices for life-saving drugs.

Ted Budd is rewarded for working for big business with expensive luxurious travel.

Budd has also been called out for pricey trips paid for by his benefactors, the Club for Growth. He attended conferences at the Breakers, in West Palm Beach, Florida, where minimum room rates are approximately $900 a night. The amount paid out for these visits cost close to $15,000, which included $9,000 for meals and lodging. These expenses were reported to the U.S. House of Representatives and are maintained in a searchable database by the clerk of the House of Representatives.

The allegations of grifting continued. Budd took multiple jaunts worth over $30,000 to destinations like Miami, Palm Beach, and Oslo, Norway funded by corporate special interests.

Dark money pushed Budd over the finish line in the North Carolina primary.

It was not just expensive trips taken at the expense of special interest groups, but dark money used to secure him a win. To successfully get across the finish line in the GOP primary, dark money, to the tune of $15 million was spent to boost him. Interestingly, even Republicans have indicated Budd is weak and ‘wholly owned and operated by dark money groups.

Budd’s family-owned company, The Budd Group, received $10 million in Paycheck Protection Program loan (PPP) funding. Ted Budd has had nothing to do with the company since 2003. The founder, Richard P. Budd, Rep. Budd’s father, and CEO Joseph Budd, the congressman’s brother, have given $14,400 in campaign contributions since 2019. Before the company shut down, Budd and his family repaid themselves $10 million, leaving N.C. farmers with a $50 million dollar bill.

And, Budd is well known for co-sponsoring the U.S. House version of Sen. Lindsey Graham’s abortion ban bill, which was not well received in the aftermath of the reversal of Roe vs. Wade. Graham’s proposed Bill would leave state laws in place that are even more restrictive while imposing new limits in blue states.

On January 6, 2021, Budd objected to the certification of electoral votes from the election even while violent Trump supporters stormed the U.S. Capitol.

Tell the Republicans they need to look in the mirror to fight the real foe threatening the country – The Republican Party who would stop at nothing illegal, immoral, or unethical to achieve their goals. They do not care about the rest of the voters.